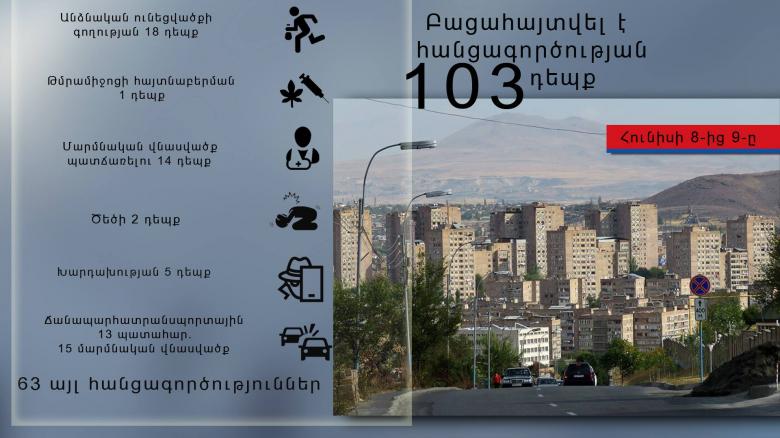 According to the operations reports of Police of the Republic of Armenia, 103 cases of crime have been detected by officers of various police subdivisions in the territory of the republic from June 8 June 9, 5 of which were earlier committed crimes.
In particular, 38 cases of drug smuggling, psychotropic substances and their precursors, 18 cases of personal theft, 14 cases of causing bodily harm, 5 cases of fraud, 4 cases of abuse of office, 3 cases of domestic violence, 2 cases of illegal tree felling, official forgery or official negligence and battery, 1 case of burglary, squandering or embezzlement, hooliganism, drug detection, bribery, illegal sale of drugs and attempts to smuggle them, coercion to participate in election or referendum campaigns, to refuse to participate in election or referendum campaigns, or obstruction of participation in election or referendum campaigns, forgery of documents, outrageous treatment of dead bodies or burial places and promoting prostitution.
2 missing persons died, 3 wanted persons have been detained, 8 others turned themselves in to the Police.
1 case of voluntary surrender of arms and ammunition has been registered.
From earlier committed crimes, 3 cases of personal theft and 2 cases of causing bodily harm have been detected.
Over the past 1 day, 13 accidents have been registered in the Republic: 15 people received bodily injuries of different levels of gravity.