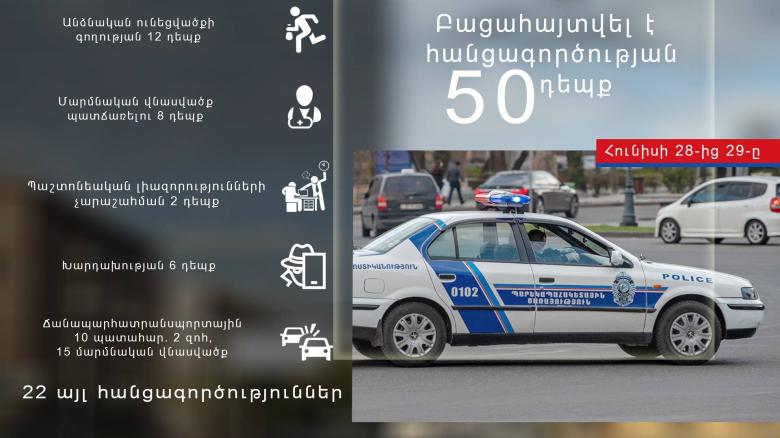 According to the operations reports of Police of the Republic of Armenia, 50 cases of crime have been detected by officers of various police subdivisions in the territory of the republic from June 28 June 29, 7 of which were earlier committed crimes.
In particular, 12 cases of personal theft, 8 cases of cauing bodily harm, 6 cases of fraud, 3 cases of extortion, 2 cases of abuse of office and domestic violence, 1 case of theft of state or public property, burglary, squandering or embezzlement, deliberate destruction of property, counterfeiting, sezirue of weapons and ammunition, obstructing the activities of the media, violating the secrecy of voting, obstructing the free expression of the voter's will and bribery of voters, accepting a bribe, violating the prohibition on charity during elections.
3 wanted persons have been detained, 7 others turned themselves in to the Police.
2 cases of voluntary surrender of arms and ammunition have been registered.
From earlier committed crimes, 2 cases of brglary, 1 case of personal theft, theft of state or public property, fraud, robbery and committing lecherous acts agianst a minor have been detected.
Over the past 1 day, 10 accidents have been registered in the Republic: 2 persons died, 15 people received bodily injuries of different levels of gravity.